The actual beginnings of the club are not entirely clear, but it is thought that the germ of the start of the club began some years before the formalising of the club, with the purchasing of the present building.

The 1905/06 Minute Book records that a meeting was held on 16 October 1905 to consider the setting up of a club and consideration of the Rules. Two Sub-Committees were formed to handle 'Refreshments and Finance' and this reflects our current 'Bar & Finance' Sub-Committee of today, the other was 'Games' and this reflects our current 'Sports & Social' Sub-Committee. Two months later a 3rd Sub Committee was formed to consider a scheme for land and a new institute building.

Land was purchased from Mr Fremlin and the Foundation Stone was laid by Mrs Fremlin on 24 March 1906 when members were invited to tea afterwards!

Trustees were appointed at this time to hold the Deeds and to whom the Committee were answerable.

A Steward was appointed and given recompense for his services, likewise a Caretaker - the advert was aimed at Pensioners and stated ' Wanted caretaker for Bearsted & District Institute'. A Secretary was appointed and given a shilling per week for his duties. Baths were provided for the members to bathe after work and it is noted that Ladies were allowed use of the baths between 9-11am starting in July 1906.

The Club was very much linked to the church at that time and this has continued despite the beverage changing from tea to beer over the years. It was, and still is, a social meeting place with Rules to govern the member's behaviour. ﻿

If you have any old photos or information that you would like to share on the Club's history then we would be pleased to hear from you. You can contact us here. 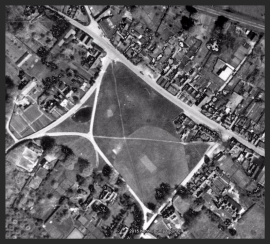